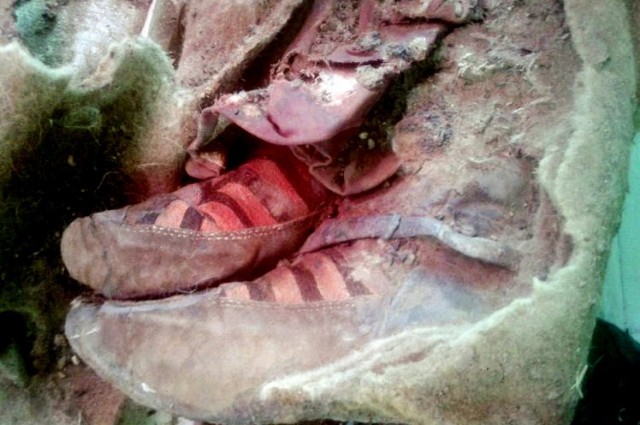 Last week there was an article in the news on a 1,500-year-old mummy in what looks like a pair of Adidas running shoes. If you didn’t get to see it, the above photo are what those ‘supposed Adidas’ look like.

When I saw the article, it made me think about my first semester at UNLV. My marriage had just gone belly up and I was trying to readjust to a life on my own. I found myself in Doc T’s Composition II (Argumentative Essay) class, a 37-year-old surrounded by students young enough to be my children. After writing almost every day to chronicle my experiences, I suddenly found myself knee-deep in schoolwork. I had completely slacked off on writing in my blog as I was researching and preparing to fight the battle of creationism versus evolution for my final 10-page paper that I would eventually title “Centerfield.” While I was procrastinating on getting my writing done, I came in here to unwind and air out a few wild theories that I couldn’t really put in an academic paper. The result? A pair of “Rabbit Nikes.”

As I re-read the post, I laughed out loud a few times. Man, the things I come up with.

I like to think of evolution in terms of a pair of “Rabbit Nikes.”  So let’s use our imaginations and think about a caveman for a second, and here’s a visual to help out…

Wait, on second thought, let’s not…because all of the pictures I found on cavemen or Neanderthals…well, the pictures all have everyone’s “whatevers” hanging out and, no, I’m just not gonna go there.  No pictures of some caveman’s willow on my blog!

But that does illustrate my point quite the bit…let’s imagine our very nude caveman walking along.  He steps down and gets a sharp rock in the sole of his foot.  Now in today’s society, we’re liable to hop up and down like a jackrabbit hollering about the pain, but to Mr. Caveman…well, that’s normal.  Sighing at the fact that he’s taken one more sharp rock in the foot, he reaches down and pulls the rock from his foot and keeps going, accepting that it’s always going to be like that. He doesn’t even consider another option.

Now, let’s switch to a different caveman, same situation. He’s walking along, minding his own business when he gets a sharp rock in the bottom of his foot, but this time instead of sighing about it, removing the rock and going about his business, he figures he’s about had enough of his only means of transportation constantly being hurt by things on the ground that he inadvertently steps on (or in).  Just then, a rabbit quickly scampers by. He sees the rabbit…he’s hungry, so he figures, “Hey!  Food!”  (I’ll leave out the quip that the rabbit was probably the first rendition of “Fast Food”…go ahead and groan, it’s ok.) He chases down the rabbit, kills it, skins it and has a really good lunch…BUT then he looks at the leftovers…bones, fur (if he’s not eaten them in the process)…all sorts of stuff…so, he looks at the cut in his foot, looks at the fur, feels how soft it is and figures out that “Hey, that fur could be protecting my foot!”   So he takes the skin, wraps it around his foot, uses the remaining bones to fasten the fur together so it’ll stay on his foot, then gets up and walks on, not worrying about rocks on the ground anymore…our friend the caveman invents the first “shoe” of sorts, a “Rabbit Nike.”

Now, let’s put the shoeless caveman next to the guy with the Rabbit Nike’s on. Is the caveman with the “Rabbit Nike’s” going to be able to go a further distance when he walks?  Odds are he will.  Odds are that he’s got better survival skills than our caveman who just pulled the rock out of his foot and moved on.

Think about it. You’re a caveman. If you hurt your feet, how are you supposed to hunt and gather when you can’t walk?  Now I’ll concede that the caveman foot of prehistoric times probably had the sole of a Doc Marten because their bare feet were their only mode of transportation; the skin of the foot was probably extremely calloused and made to survive a sharp rock or two.  But now we’ve got this guy with the Rabbit Nike’s on…he invented something that he probably put on his girl, then on his children.  What happens to the feet of that family?  Odds are they got softer, because there was not a lot of damage being done to them; the damage being absorbed by the fur and skins that encased their feet.  They got to walk farther in inclement weather, (snow, ice) and generally survived a lot better.  That is a great case of evolution.  The next generations of the family of the Rabbit Nike inventor unwittingly had caused a change in their feet, with less damage being done to the foot and fur-lined insulation cutting down on illness, that means they could hunt and gather more and enjoy a better quality of life, thus leading to the dominance of the Rabbit Nike-wearing caveman.  That singular innovation passes down through the generations, changing the foot over millennia to what we see today when we look down at our feet to get out of bed, all because some caveman was sick and tired of getting a sharp rock in the sole of his foot and was smart enough to use the remains of his lunch to protect them.

Now while I’m using a male pronoun for the caveman, it could have easily been a cavewoman who invented the shoe. Actually, I’ve got odds that a woman invented the shoe because, I mean, come on, girls and shoes? Yeah…that whole thing had to start somewhere.

This, of course, is followed by the evolution of the first shoe salesman:

”You like fur?  You like no rock or thorn in foot?  You like to run fast to catch mammoth for big meal or run away faster when big cat tries to eat you?  Shoe made from rabbit.  Rabbit fast.  You be faster wearing Rabbit Nike.”