Today, let’s just say it out, I’ve been feeling awful. My session yesterday had me wake up this morning and feel like I had just taken a quadruple shot of novocaine straight to the chest. Numb. Absolutely wretched. Like some jackass came in and just sucked all the hope out of my body and left me for dead. But PTSD therapy is like that.  What did we say? 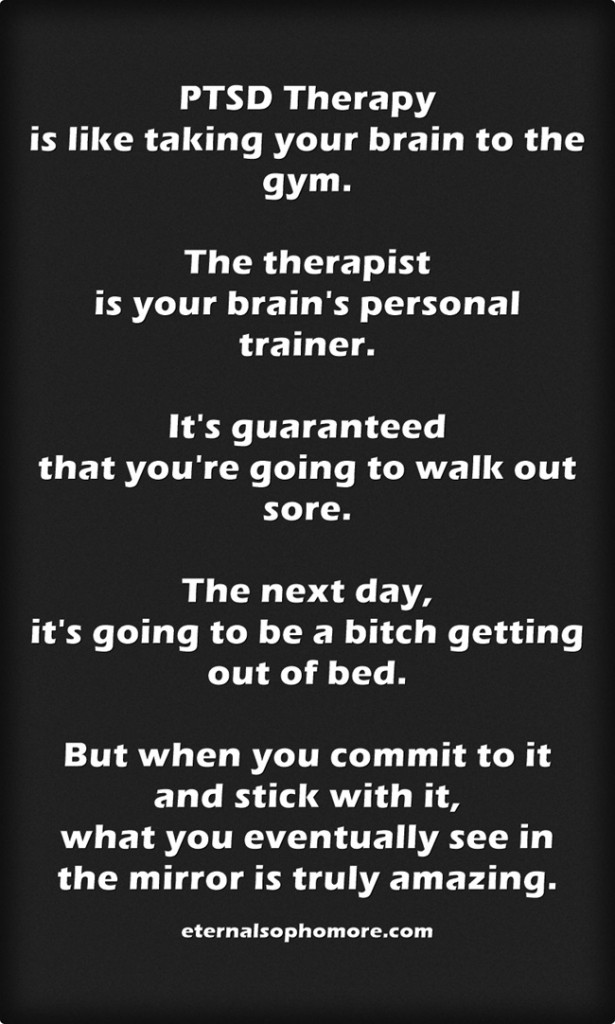 That said, in the overall, therapy has been going well. No, scratch that, it’s been going just freaking awesome. My therapist says that I’m one of the hardest working clients she has. I never miss an appointment, I’m never late for my appointments, I do my homework, I apply it to my life instantaneously and I refuse to stop, give in or give up until I’m healthy again.

I walk into her office and say, “THIS is what’s bothering me, and I don’t want it to bother me anymore” and we rip off the band-aid, pour alcohol directly into the wound, break out the wire brush and clean out all the crap that’s holding me back. You really don’t get how much I want to feel better. I have things to do, a world to conquer, and I will be damned if I let a set of triggers caused by a bunch of ignorant assholes to get in my way. I’m just done with allowing them, AND MYSELF, to be the biggest obstacles in my own path.

I’m aggressive with my treatment because I want to get better. I’ve squandered too many years on allowing myself to be treated badly and outright treating myself badly because I thought that I didn’t deserve love, that I didn’t deserve good things to happen to me, that I was a discard, that I wasn’t worth the skin that was holding my bones in place. I lived for over 40 years apologizing for breathing because I (wrongly) assumed that everything was my fault because I was so used to being the scapegoat and the target for maliciousness by people with some serious issues.

Well, guess what? That’s a bunch of bullshit. That’s someone else’s shoulder yoke and heavy buckets, their emotional baggage and THEIR issues that I was just oh so happy to run up, pick up and bolt it to my skeleton so I never dropped it. And then I proceeded to carry it. Like a moron, I carried it for YEARS!!! Baggage that wasn’t mine to carry…that didn’t even have anything to do with me, and there I was carrying it.

What a damn waste of time. That’s the thing about being an emotional baggage bellhop, the bags aren’t yours to carry and the tips suck. The person you’re carrying it for isn’t going to say thank you, and newsflash, they don’t even CARE if you’re carrying it! They don’t even KNOW! But there you are, dragging it along like some schmuck that doesn’t know any better! When the ton of bricks hit me that it didn’t matter if I was standing in the vicinity or not, people are going to say what they’re going to say, they’re going to do what they’re going to do, and it doesn’t make a flying fart in space of a difference who’s there, they are going to spew their bullshit anyway. This unique tidbit brought to you by the phrase “Don’t take it personally” because that’s the working definition. Hello. 43 years to learn what that phrase meant. *facepalm*

In college, Doc Cat clued me in that I was carrying stuff I didn’t need to carry. Remember how I struggled with that? Well, guess what, thanks to Ferris and my Aunt Lee, I got on the phone, found a therapist and promptly took KP’s advice and promptly went to work putting the serious hammer to nail to build my bridge to stomp on and get the fuck over it ALL. I got to the point where I said, “Enough already. If I’m supposedly SO brilliant, as smart and talented as everyone says I am, then you know what? I can take this on and win.”

So I got into the therapy room and I went to work. And I’ve working my ass off for two hours every Thursday for the last six months. And a lot of the time, yeah, it’s hard. Some days I get to slack off and laugh. But there have been a LOT of days where I cry inconsolably. But you know what? I’m committed to the process and that’s the WORK. You want easy? Screw you, get back in the corner and wallow in your self-pity. Settle for living with the pain. Be lazy and do NOTHING about it. You wanna feel better? Then DO THE WORK. Believe in something, the very best something that you would never in a million years believe could happen to you. See yourself the way you’ve always wanted to: strong, vibrant, desirable and most of all, loved. Loved for every quirk, idiosyncrasy, genius moment, goofy yet charming chortle and clumsy fall.

I knew walking in and committing to treatment that it was going to be hard, that change only happens when you want it so badly that you can taste it in every breath, that you don’t want the constant anxiety anymore, that you’re tired of getting triggered by some jackass not worthy of your time, much less for you to waste more time dwelling on said jackass.

I didn’t go into the therapy room to start this journey thinking it was going to be easy all the time. Had I assumed it was going to be easy, I’d still be some strung-out doodah letting some guy treat me like dirt. Or allow some jealous herd of cows to pass judgement on me because I just happen to be extremely smart and pretty to boot. By the way ladies, it’s not a crime if boys like me. I’m actually pretty fucking special, so I’m sorry if you have a problem with that, but that’s YOUR problem, not mine. Carry your own fucking luggage for a change because it’s not my fault you have self-esteem issues because boys don’t look at you the way they look at me.

No, that’s not who I am anymore, thank you very much, and I’ll be damned if I ever let anyone make me feel like I’m not worthy of being loved, adored and goddamned *worshipped* for the really awesome person I am ever again. Hey, like my therapist says, “You have to love yourself first and best, only then can someone love you the way you want to be loved.”

So, as I was sitting here at my desk, feeling awful and numb and just wretched, I was listening to the Under the Tuscan Sun Soundtrack and I remembered what Diane Lane’s character said in the middle of the renovations to her villa in Tuscany. There is only so much work you can do on your house, your soul and your PTSD before you just have to GET OUT.

I happen to live in one of the most exciting cities on the planet. It’s Vegas for fuck’s sake! So you know what I’m going to do tonight? I’m going to finish working, I’m going to go to the gym, then I’m going to go home, get ready, and then I’m just going to get out and see the city. Take a walk, go visit the conservatory at the Bellagio, I DON’T GIVE A SHIT where I end up going! I’m going out!

Thank you Christophe Beck! Without hearing “Roma” go off in my headset, I’d still be sitting here feeling horrible.

And if a hot guy asks me out, I’m saying YES.