If you’re versed in MMO’s you might be familiar with the ‘misdirection’ ability the hunter class has in World of Warcraft. It’s as you would expect, the hunter misdirects any attention drawn to them onto another target. Basically, misdirection is used so the hunter doesn’t get summarily squished by something large and angry that wields a punch similar in force to a Mack truck.

Now if you ask my buddy Chance, who plays his hunter with deft skill and a certain joie de vivre, there is some fun to be had in misdirecting to someone in order to yep, you guessed it, kill them on purpose. Hey, I’m not innocent at all, I’ll admit it. Many a night myself, KP and Chance sat cackling on Ventrillo (our voice-over-IP software) watching Chance misdirect to someone that couldn’t play worth a darn and was hurting our group or who had really made a horse’s behind out of themselves with prideful and malicious bragging. There were many times where I saw the red spiral graphic that signaled a misdirect go off and keying my mic and saying with a mix of shock and dread, “Nooooo, you didn’t,” which would of course be followed by a giggle and a “Me? Nope,” which of course said he did. Sure enough, it didn’t take much time before a bragging mage would be no more than an inkspot and all of us on the other end would be cackling because, come on, we all know someone who we’d love to metaphorically see meet a painful demise with a single hit.
While it’s just good-natured fun with a toon made of pixels in an online world, it’s not much fun in the real world; actually it’s just flat out mean.

What brings this topic up today is a phone conversation I had last night with the most unlikely of individuals…a friend of mine from high school.

Now, for those of you whose jaw just dropped onto the floor, you would be correct with that reaction.  I mean, how many times have I written about how much I disliked high school? How many times have I gone on to the point of nausea about how much I despised the bullies and the malicious hammering I took on a daily basis? Yet, there I was last night for two hours talking to one of the very few individuals who not only befriended me, but protected me ferociously. Of course this comes with the caveat that this person was a senior when I was a freshman, so I only enjoyed a single school year of their very careful protection, after that it became open season on my then-narrow backside and oh boy did I take it coming and going after they left for college – it got ugly fast.

Another point that bears brief reinforcement is that bullies are my hot topic because I suffer from C-PTSD because of malicious attacks by the bullies that seemed to inhabit our school district like some sort of infestation. Hey, it’s not fun remembering clothing textures, colors, smells and all of the other parts of the intrusive memories I try to avoid (which make me break out into cold sweats) when I get triggered with a panic attack when I’m reminded of those very hurtful moments from so long ago.

For those not acquainted with PTSD, C-PTSD or Borderline Personality Disorder, you should really spend some time and look them up. I will be the very first to tell you that living with mental illness caused by the ignorance and maliciousness of others is something I wouldn’t wish on my worst enemy, much less anyone I loved. It’s a very painful illness that is a struggle day in and day out.

Now, let’s connect some dots that until this morning had eluded me completely. Remember, with my brain comes the caveat that I don’t have common sense to pee on.  Sad but true. Actually, I’m completely convinced that IQ is inversely proportionate to common sense. Think about some genius level, MENSA-type person you know…how often do they grasp things that are extremely simple?  Not often. I mean, I know some folks that tying a simple shoelace is a complete mystery, yet they can do quantum physics in their heads. Trust me, I don’t have much of a sense of humor because I completely miss simple, little things; so I end up looking at people like they’re half out of their minds when the joke is actually funny – once I sit back and think it through, accounting for the small pieces my brain automatically takes for granted.  Trust me, I’d trade my book smarts for more common sense any day of the week, but alas I’m kind of stuck, so I take it in stride.

As I eluded to, sometimes it takes me a little bit of time to “get” things, so this morning, after my brain had time to process it, there was something about last night’s conversation with my friend from high school that really had me going. I won’t lie, I’m my own harshest critic, so I have never called myself a dummy so many times in my life as I sat berating myself for spending the last 30-someodd years missing something plainly obvious.. Let me take you through it so you understand why I’m so mad at myself – it’s because I could have saved myself YEARS of agony along with having the ability to short-circuit my illness.  But while I can be ticked at the malicious bullies that made me a target, I’m even angrier at myself for not having the common sense to see what was happening until now.

Before I reveal my morning’s epiphany, let’s talk about bullies for a second and their odious Modus Operandi. As we know, bullies have their own issues. Like my C-PTSD and BPD (which is akin to having unhealed third degree burns on my emotional system), bullies have something that could be deemed just as bad as my illnesses that were caused directly by their actions.

What is it that makes a bully an actual bully? Well, usually very often, they come complete with one hell of an inferiority complex caused by being made to feeling powerless in their own world. Think about all of the overbearing, controlling, verbally, physically and mentally abusive parents or authority figures out there. If you want a better picture of the evolution of a bully, let’s take a look at one that is courtesy of Generation X and John Hughes. Take a moment and think of the character Judd Nelson played in The Breakfast Club, a young man named John Bender.  Lucky for us, if you don’t remember, YouTube has a clip of “Life at John Bender’s House”:

Sorry about the language, but just think about what it must have been like for him at home with a father like that. I’m grateful the clip didn’t do the follow-up which showed the physical abuse he withstood and the subsequent anger that resided in that young man from feeling so very powerless and demoralized. So, as our case in point, we see only one small example where a bully could be born and bred in some cases (not all), but we also have to take into account that some young people are just flat out mean.  It is what it is and we can only sit back and speculate, merely guessing at what makes bullies tick, but I’m venturing a solid guess that it is because they are trying their best get the attention off themselves.

Personally, I believe where John Bender is a really great caricature of a rebellious spirit (can you blame him?) caused by a dysfunctional home, I also believe he makes a great jumping off point to talk about bullies and misdirection, which brings me all the way back to the conversation I was having with my friend from high school last night.

Of course if you’ve seen The Breakfast Club you know that each character is a stereotype. While some may resonate with Molly Ringwald’s ‘Princess’, Emilio Estevez’s ‘jock’, Anthony Michael Hall’s ‘nerd’ or Judd Nelson’s ‘rebel’ or ‘bully’, down deep I always found myself very drawn to Ally Sheedy’s ‘basket-case’, ready and willing to sell my soul or do anything that would make me feel like I had some sort of value that garnered acceptance.

By the time high school had ended for me, I had embraced being an outsider. I’m now very grateful I did accept being a part of “the fringe”; I won’t even sugar-coat it, it was a very, very hard existence to live through but it gave me so many more opportunities on the other side because it encouraged me to think differently, proudly becoming a offender of the status quo.

But it was a simple question posed by my pal from high school that set everything in motion that gave me the biggest relief I’ve felt in a very long time. My friend simply asked me to name names of who bullied me. All it took was for me to say a single name before they burst out into laughter. I sat perplexed and asked them what was so funny.  The reply was one that completely took me by surprise:

“Them? Oh my goodness. That’s the pot calling the kettle black if I’ve ever heard it. I could tell you stories about them aplenty. That’s the one person that had no right to say anything for they were just labeling you with what they really were.”

At hearing that, I burst out laughing, but it wasn’t until I had a good night’s sleep and gave it a little bit of thought that suddenly shed so much light on everything that I not only feel better today, but I actually know in my heart that what those bullies did to me was never, EVER about me…it was about THEM, their insecurities and their need to feel like they could exercise some sort of power over someone else, no matter what lengths they had to go to, just so they felt safe.

My pal from high school made me realize that all bullies do (outside of showing that they have less common sense than I do) is misdirect. They take critical eyes off themselves and put them onto their victims because of one reason alone: fear that someone will figure out their glaring faults and turn the harsh spotlight of truth their way.

But, I did give myself a break from berating myself for one simple reason: I realized that in that moment some 30 years ago, I was so busy trying to protect myself, I didn’t have time to scratch my backside, much less figure out that a red spiral graphic had gone off above the bullies’ heads, signaling that they were misdirecting their insecurities at someone they already knew was hurt.  It’s kind of sick, but I’ll give them this, it’s one of nature’s laws that the injured get picked on…

They just never realized I’d turn into a swan with an attitude, who just happens to be toting a 400-pound two-by-four. 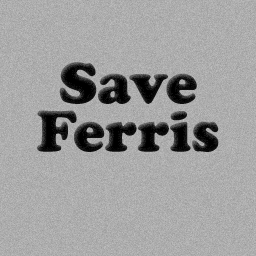 And of course, the song of the day is one of his favorites…that also happens to be one of mine…

Thanks Bryan Bueller…for the protection and being a pal…you’ve earned a name here, we’re just going to call you Ferris and as you said to me the day I met you so many years ago…