Sorry it’s been so long since I’ve updated my blog.  It’s been busy, busy around here.

Let’s start with a catch-up on what’s happening this semester, then onto today’s entry:

Spring 2013 marks me being just a few credit hours away from my degree after this semester, so I’m in the middle of the hunt for my minor, Family Studies, or as you’ll be seeing it abbreviated, MFT for “Marriage and Family Therapy.”

I don’t know what the hell I was thinking with a minor in family studies. Given my background, I might as well have signed up for electroshock treatments, but I’ll tell you this, it’s a sight better than the fascists over in Communications.  Don’t ask, I’m not even going to talk about it.  Just sufficed to say my experience with the Com staff was bad, actually, really bad, so let’s just leave that alone.  Still in need of a minor, I hollered at a famous face here on the Sophomore, the incredible Doc Cat, and she’ll not only be taking me through therapy techniques in MFT 428, but also acting as my adviser for the rest of my time at UNLV.   So, give a cheer, Doc Cat is back, hopefully she won’t have to tow me across the finish line in a big heap. Cross your fingers.

With MFT, all semester has just been one, long, triggered nightmare.  I actually had to beg out in the middle of my MFT 350 class two weeks ago because my triggers became so bad I actually had a puddle at my feet with how hard I was crying because my triggers went off so hard.  Of course you know what happens when my triggers go off that bad, right?  Through no choosing of my own, I literally want the blood of the people who hurt me. Given the topic that day, people better be thanking their lucky stars or whatever deity they fearfully worship, because it would have turned ugly really fast if I would have had proximity to a single soul responsible for my illnesses. Doc Cat has been telling me for years that I’ve been too lenient on the people responsible for my wonderful illnesses and that it is only natural that I am violently P.O.’d.  Trust me, if you think I wake up like a 2-ton bear with sharp claws and an attitude, you don’t ever, and I mean EVER want to see me triggered to the point I was a few weeks ago, it makes that bear look like a wimp. ‘Too lenient’ is keeping me out of trouble.

See, when I’m triggered really hard, all bets are off because nothing on this planet (outside of heavy sedation) will begin to control my defense mechanism which manifests as an uncontrollable flight response. If anyone gets in the way, purposefully blocking me from escaping, that person has taken their life into their own hands; because at that point, my illness doesn’t differentiate: it becomes extremely violent because all I comprehend is the raw, unbridled rage of my intrusive memories. Think of it this way, it doesn’t matter if it were Santa Claus or the Virgin Mary standing in front of me, I wouldn’t be able to tell. All I would see is my intrusive memories and given that I’m a lot stronger than I used to be, things go flying and I wouldn’t be surprised in the least if some idiot got in the middle of that, they’d come away with an actual limp.  If I’d be coherent enough to realize it was someone who was actually responsible…oh gods, I don’t even dare want to think about what would happen. I’d probably end up in jail.

The worst part of it all? I have yet to see the extent of what’s hiding down really deep. With the taste of it I got two weeks ago, then another incident that followed, I actually fear how much anger is in there; and the gods help whatever dumb-ass decides to pull the Darwin Award-winning maneuver of turning it all loose.  I’ve become Bruce Banner in The Avengers. If you can’t quite remember, just take a glance back at Bruce Banner’s answer on how he controls his anger. I have the exact same answer.

The best part of it though? Ace. I’m so grateful for him, I can’t even begin to describe it because he’s helping me with the anger thing. Latent, repressed, all sorts, by now it sounds more like ordering a cup of coffee at Starbucks than an emotional management issue…”Yes, I’ll take a Grande Passive-Aggressive Cappucino in a Venti cup with two add shots of latent hostility, fill the rest with the milk of human kindness…mmhmm, that’s to-go.”

Oh, and here’s the funny part…seems as more folks from my adolescence have decided to friend me on Facebook. So, welcome to them.  Coffee, anyone?

Yes Hephaestus, my dear Editor, I hear you…I liked the coffee joke!  That was a good one! I can’t help but hear the cat with Sylvester in ‘Birds Anonymous’, “One little bird! Just one little bird! I gotta have it!”  No iLemming jokes? Oh come on, just one little iLemming? What about a medical spoof about how vicariously living through others leads to ill health effects? No? Oh Pbbbt.  You’re no fun.

But, let’s get on to more fun things…like today’s fabulous post!

As I’ve written about on numerous occasions, I’m a really big fan of Sherrilyn Kenyon.  In all the years I’ve been reading her books about all of her PTSD-afflicted heroes, I’ve never resonated completely with a singular one of her Dark Hunters. Understood all of their stories perfectly? Yes. Knew 110% where they were coming from? Heavens, yes! Each and every book has been like a trip to the therapist and then some. Nobody writes about what I struggle with every day like she does.

My first Dark Hunter novel was one I actually got as a Christmas gift and it only took me about a week to finish it. Still to this day though, Acheron is a character I consider to be like a brother. I whooped, hollered and cheered my head off when Soteria handed out a long-needed talking-to; I’ve cheered many an hour for the Kattalakis boys, AND was just tickled pink to find out Zarek and Sundown loved playing Myst Online together!!! I love how she just spins all of her characters up in this huge, paranormal, dysfunctional family. I, like many of her fans, wait with bated breath to see which character is going to be next in the series.

Well, until we delve into the next part of the Chronicles of Nick with Inferno, her latest hero to step up to have his story told is Ren in Time Untime which I’m currently enjoying as my spring break pleasure read. Okay, I can now say there is a Dark Hunter that could easily exchange their story for mine.  I’ve never cried so hard in my life through parts of a book like this. Some pages are verbatim straight out of my life; so much so that I had to put it down at the end of chapter 7, wiping my eyes with my umpteenth Kleenex, saying to myself, “I can’t take anymore right now.”

I won’t lie, each of her books is really draining for me but really awesome with a healing upside…it’s one of those moments where you get to let out a sigh of relief and say,”It’s good to know I’m not alone and wasn’t the only one who went through something like that.”

So if you ever decide you need an adventure and Ms. Kenyon and her books seem appealing, have a ‘surgeon general’s’ type warning: When people call Sherrilyn Kenyon ‘author goddess’, they ain’t lying! Good to the last sniffle and bit of runny mascara, except with Bond cars and gadgetry, along with action packed portions that will leave you wishing you’d have learned a classical weapon or some type of martial arts fighting style.

Okay, enough of this weepy, girly crap already. Time to stow my C-PTSD whines and put on my cape so I can go do my ‘average, ordinary, everyday superhero’ routine.  The problem is…Edna Mode says, “No capes!” So I’ll just have to go with the Kill Bill “Clark Kent” analogy. That should lock up more than a few minds for the day.

Double-header of vid for you today, like the description of me turning into the She-Hulk wasn’t frightening enough…

First, that little analogy I mentioned earlier (which my ex-husband swears it’s so me):

And for those of you who know me really well and have been around for me leaping over tall buildings with a single bound, gimme a ‘damn straight!’ my sweeties, even with parts that are still broken, this one has been a long time in coming.  The second, by Smashmouth, is the song of the day:

Hey Momma Kitte…this one is for you: 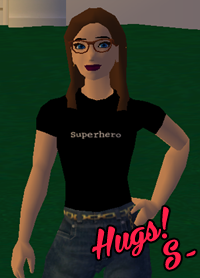