Authors Note: Beware, I’m totally geeking out on the Myst Universe in this post.
Ok, let’s start out with a small confession…as blasphemous as this may sound to all my resident Myst maniacs and beloved fellow Uruites, I’m so ashamed, I confused Riven and Exile tonight.
Wait!  Before you string me up by the Great Tree, I have to point a finger…It’s KP’s fault!  I was talking to him on the phone and well, I was describing the beautiful flowers of Edanna and had my head all wrapped up in that, and I installed the wrong game.  I meant to spend the evening in Edanna and Ameteria in Myst III: Exile, and well, I goofed.  Instead of spending time with the flowers, trees, dynamic forces and ol’ friendly Saveedro’s hammer, I spent the evening battling Gehn on Riven.
Shoot me, ok?  Just shoot me.  I am not worth the ink my book is written with, I’m so ashamed!  In my defense, I will say it’s been over seven years since the last time I played either one of them, although I am a regular in cavern in the late evening hours.  Now as Tae would tell me, “Don’t worry, it’s still a part of the Myst Universe,” and while she’d be right, well heck, I wanted to play Exile, but I couldn’t afford to blow any more time on installation.  Yes, it sounds lazy but I had a bunch of reading to do, so I didn’t get started until late, so you’ll just have to forgive me for it.
I have to say, even though I had my heart set on Exile, Riven was a breath of fresh cavern air.  I had forgotten how wonderful Riven was, from the blabbering fella who gets darted from the get-go to playing with the Whark and the counting machine, it was a real treat.
Oh, for all of you non-Myst folks out there who have yet to experience the perfection that is all things Myst, here, this is a Whark: 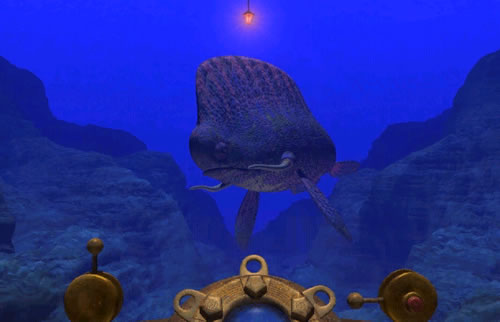 Cute, isn’t he?  Ok, ok, so maybe a Whark isn’t your speed, but he sure is mine!  Hey, I’m the same girl who got bit in the head by a shark, so cut me some slack if I think a Whark is precious.
Well, maybe a Sunner is more your speed… 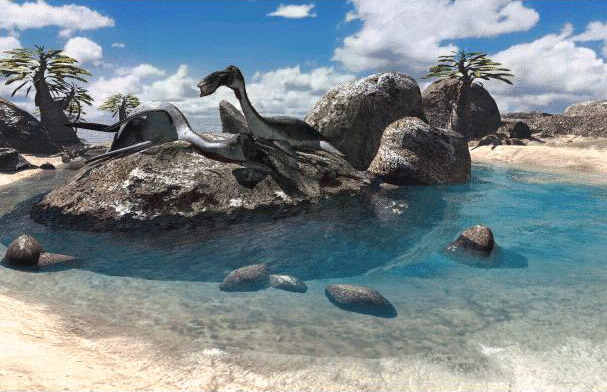 Either way, the Myst Universe is chocked full of great critters.  By way of Exile, we got introduced to a Squee…

Isn’t it just precious?  Yes, I have a friend by the name of Country Squee…and she’s awesome along with all of her many ranches full of Alpacas. (Hi Squee!)
But all of the cuddly Myst animals aside, I got to spend time in Riven.
First thing out of the gate, I swore to myself, “NO WALKTHROUGHS!”  The hallmark of a true Myst fan is that you can do the puzzles with no help.  It’s all a matter of using your D’ni logic.  Rule 1:  Make sure the power is on (and directed to the right spot).  Rule 2: Explore every nook and cranny.
The opening pages to the Riven user’s manual gave the quote of the night:
An old D’ni proverb reads, “Lose your questions and you will find your answers.”
And believe it or not, I was looking at it while the game was installing and I was on the phone with KP.  I stopped dead in my tracks and said, “Oh my gosh…KP, you’ll never believe what I just read,” and I read that proverb to him adding, “You know, I should remember that when I ask you deep questions at 3 a.m.”  He went on to talk about how sometimes it’s wise to not question and instead, just observe.
Well, sure enough, KP and I get off the phone and I fire up the game.  Then after a few minutes of trying to figure out how to get to Edanna through Riven (Oy veh. Doc, I need to have my head examined… and Tae, don’t you start…) I realized I was hell and gone from anywhere near Exile.
However, I will say, I’m very proud of myself…even after getting trapped in a cell, then watching the jabbering fella on Tay get darted, then watch as a Moiety jammed one of their famous daggers into the works (gotta think of Tae again there, she made us Moiety daggers to hang on our door frames in There.com), I figured, what the heck…here we go!  I zoomed straight over to the boiler tank (Riven (or as Gehn says, “Age Five”) runs on steam you know) and got everything working right.  I dumped the water out, caught the frog, and went nuts.  I was so happy, I got through a puzzle with no help, just plain ol’ D’ni logic and after nine years of having to use it almost constantly, you better believe I was tickled pink.  I was reading the D’ni numbers on sight (although I did mess up 10 and 15…) Oh yeah, that’s right, not all of my fellow Sophomores are versed in D’ni numbers…here, have a chart so you can see how I can screw up 10 and 15 because I forget which gets the bent glyph and which gets the angles…

And yes folks, I can read the numbers on sight with no key.  Ok, Tae, stop laughing!  I’m serious!  They don’t know that the number three in D’ni, which looks remarkably like the letters “KI,” which is also the name of our cavern communication device that serves three functions (camera, chat and journal) is pronounced the same way…”key” and the rest of you can NOT give me a hard time, I’ve heard people pronounce KI as “Kai” when it’s really said “Key.”  So pffft.  And it’s an entire debate that’s taken me off topic!  I’ll argue it with my fellow Uruites on Funday down in the ‘hood.
Anyhow, I got down to the classroom in Riven and about keeled over.  I was “awwww”‘ing all over the place, and most of all, I played with the counting machine until I nearly fell over.  As the numbers would come up, I’d read them and sure enough, right every time, counting the little guys going into the whark’s mouth, squealing with joy.  I know my numbers Auntie Soosi and I lit Firemarbles just for you as I remembered the Society for the Protection of Firemarbles!
For the non-Myst folks, this is the counting machine:

The two pieces hanging from the strings are little men who drop down the number that’s displayed in the center (which in this example is a two).  When they get close to the Whark’s mouth (on the right, mounted in the base) it eats them.
I waded through the puzzles until I saw the time…oops, I have an early class in the morning, but that wasn’t until I got to Age 233 and heard Gehn’s blathering about how he’s a changed man (which garnered hollers of “yeah right, buddy!” and lots of “boo!”) I realized I better hit “save” and return to it tomorrow.
However, the best part of the evening?  Beating the puzzles with no help.  I was cheering my head off every time I beat a puzzle and screaming, “Take that Rand!” and getting up for bio-breaks singing to myself, “Walk like a D’ni Girl…”
You know after telling so many people about how great the Myst Universe is, I just had to go back in and spend an evening being Mystified…(ok you can boo at that corny joke.)
Ahhh, Riven.
For you iPhone people, you know there is Myst and Riven for your iPhones…pick it up…it’s highly addictive and SO much fun!
Myst Universe for the win, baby!