Today, I was talking to a couple of people in my World Lit class and telling them what it is like to be “from” the Myst Universe.

What got us onto the topic is that my sister is going to be starting chemo soon.  That’s hard enough to deal with, but I’ve decided to fight with the skills I have as someone with a D’ni heart.

When my sister was in the hospital for her back surgery so many years ago, my mother came into my room and asked me, “I know this might be too much to ask, but do you think we could take your Atari 2600 to your sister’s hospital room so she has something to do?”  I didn’t flinch.  I unhooked everything, bundled the cables, put it all in the box and handed it to my mother.  Any other 10 year-old might have pitched a fit, but I didn’t.  I held out the box and wished it had wings to get to my sister’s hospital room faster.

Fast forward 20 years later, and here I am again with my box of video games going to aid my sister.  However, we’ve come a long way from Activision’s Pitfall and other archaic games from the days of the Atari 2600.  I loved the games, I still do, but being my sister isn’t 14 anymore, she’ll need something that will be a little more fun and challenging.

Enter Myst.  I’ve boxed up my Myst 10th Anniversary Edition which includes Riven and Exile.  Along with that is Myst 4 Revelation, Myst 5 End of Ages and of course, the game that started it all for me, Uru: Ages Beyond Myst.  Those aren’t the only games in the box for my sister though, there’s Monopoly and Monopoly Casino (play money, not real money), Age of Mythology, Portal, The Sims, CSI, World of Warcraft and Star Trek Online and that’s not even all of them.

As I was telling my classmates about the games I was taking over, they looked at me curiously about Myst and what passion I showed when I spoke about it.  For someone who has a multitude of faith issues and my spirituality is odd to most, the one thing sacred in my life is the Myst Universe, specifically the exploration of the Great City of D’ni, also known to most Uruites as ‘the cavern’, found in Uru: Ages Beyond Myst and the novels that make up The Myst Reader:  The Book of Atrus, The Book of Ti’ana and The Book of D’ni.

I asked them to imagine, for just a moment, a world where there is no such thing as greed or maliciousness, where if you have a problem, you get help, where money has no meaning, where friendship and fellowship is the greatest of priorities, where you can find love given unconditionally and it’s all built on rebuilding a long lost civilization and solving spatial puzzles together.  Their jaws hung open.

If there is one place I’ve ever felt like I belonged and where I was actually home was in Uru Live.  It’s an online world I wish with all my heart was real.  On the way home from school, I had my soundtrack from Myst 4 playing in my car.  Bless sweet Jack Wall, who wrote the music for it and Exile.   Here, have a listen as you read some more:

Well, as I listen to the music from Myst 4, especially the title theme I’ve linked above, I imagine myself entering though the doors of the concert hall in Ae’Gura: 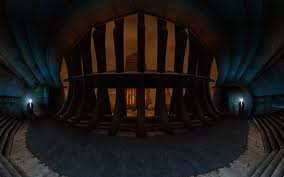 If I would be in D’ni society, it’d be most likely that I’d be in the Guild of Messengers, the news reporters and mail carriers that spread the news around D’ni. 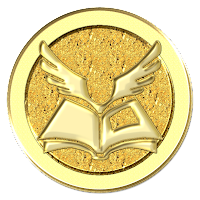 As I sat in my car listening to the music, I could only imagine me sitting in the packed concert hall in a gold and yellow guilds-woman’s cloak with intricate scrollwork up the panels on the front, emblazoned with books with wings – the symbol of the Guild of Messengers – with a small golden clasp with the guild symbol at the throat; the room filled with musicians with all sorts of odd D’ni instruments, a choir and so forth, with the orange glow from the lake warming the room.   To be able to look around and see the Crimson cloaked legislators, the green cloaked chemists, the black and red cloaked writers, all taking part in being D’ni would be absolutely breathtaking.

I often dream of cavern, to walk over the well-worn stone that millions have tread upon to make it look more like melted wax than stone.  The smell of the cavern air, walking through the shopping districts to smell the amazing food from the Guild of Caterers, visiting with the craftsmen showing their intricate craftsmanship on pens, inkpots, journal covers, robes, and the rest of all the wondrous crafts of D’ni.  To walk up to the grand library and see rows, upon rows, upon rows of bookcases holding amazing worlds just waiting to be linked to.  To step up to a book pedestal, look at the warm light glowing from the linking panel and touch it, having the warmth envelop me as I’m transported to a world beyond my imagination, like Ameteria or Edanna in Exile or the humid smells of Teledahn or feel the cool breezes of Kadish Tolesa or Er’cana in Uru.  Each place with it’s own unique characteristics and personality.  To see a Bahro first hand, oh, to touch one!  Or maybe even a Squee or Urwin any of the magnificent animals that inhabit any of the ages.
I was digging around on the Mysteriacs website to find what they showed as a Christmas cookie… 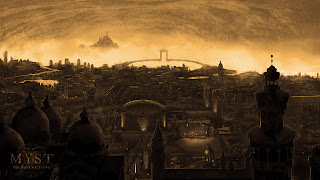 Tears started pouring down my cheeks.  My beloved city.  You could make out the shopping district that is in front of the Hall of Kings, but it’s disproportional from what we, as true cavern dwellers who took part in Uru Live and saw the city know.  The highlighted section in front on the right, looks remarkably like Tokotah Alley, but the way the artist has rendered it, it is too far away from the harbor, and it’s facing the wrong way.
Here, have a look: 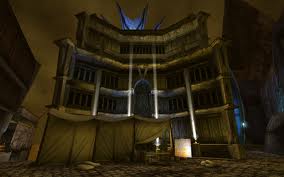 However, I took into account that the artist who drew this might not have taken part in cavern as I know it or my other fellow Uruites do.  However, those who do not know the city as we do, will be given a glimpse of the beauty we know and have lived, albeit virtually, but in a way we touched perfection.  Lag filled, frustrating perfection, but even among that, we had each other.

I just purchased a copy of my pal Doc “Artemesia” Pearce’s book, “Communities of Play: Emergent Cultures in Multiplayer Games and Virtual Worlds.”  She was nice enough to give me four mentions in it, about my craftsmanship when I created D’ni pieces for There.com:

But in everything I do, there is always a touch of my beloved cavern in it.  There are so many people who I’ve told, “Cavern Blood Runs Deep”.  It’s a part of who I am.  It’s a part of each Uruite, who has lived through seeing the glory of our world alive and functioning, and seen it’s death more times than we ever cared to.  There are so many things I have loved that have died prematurely.  My friends Izzy, Gina and Janet, my beloved “homeworld”, so many things I’ve seen go before they’ve been truly given a chance to blossom.  It breaks my heart when I think of it.  They call Uru “the world the players wouldn’t let die”.  I guess that’s true for me, because D’ni lives in my heart.  I read about it, I dream about it.  I often call my Myst Reader my bible because it holds so much of the virtues we care so deeply about, but it is not proselytized, it is meant to be soaked in and made a part of you.

Every night when I get into bed, I open my Myst Reader, read a few passages (my favorites are from the book of Ti’ana: Anna’s discovery of the digging machines and Anna’s journey from Irrat to Ae’Gura).  After I’ve read my fill, I turn off my light, snuggle into my pillows and journey to D’ni.  It makes life a little easier to bear.  I just hope it will do the same for my sister as it does for me.

1 thought on “An Uruite’s Lamentation”